An Engineering Feat: The USS Nautilus

Upon learning that Charles Edward Roth, whose company created the mold for the propeller of the USS Nautilus, was the grandfather of PropTalk’s customer service manager, Brooke King, we decided to learn more.

The USS Nautilus submarine, launched in 1954, currently calls the Submarine Force Library and Museum in Groton, CT, home. According to the museum, construction of Nautilus was made possible by the successful development of a nuclear propulsion plant by a group of scientists and engineers at the Naval Reactors Branch of the Atomic Energy Commission under the leadership of Captain Hyman G. Rickover, USN.

In July of 1951, Congress authorized construction of the world’s first nuclear powered submarine. Nautilus’s keel was laid by President Truman at the Electric Boat Shipyard in Groton on June 14, 1952. After nearly 18 months of construction, she was launched on January 21, 1954, with a christening from First Lady Mamie Eisenhower. Eight months later, on September 30, Nautilus became the first commissioned nuclear-powered ship in the United States Navy.

Over the next several years, the submarine shattered all previous submerged speed and distance records. On July 23, 1954, Nautilus departed Pearl Harbor under top secret orders to complete “Operation Sunshine,” the first crossing of the North Pole by a ship. With 116 men aboard, she accomplished the task with the announcement from Commander William R. Anderson, “For the world, our country, and the Navy: the North Pole.”

In 1960 Nautilus completed her first major overhaul—the first of any nuclear-powered ship—in Kittery, ME. Over the next six years, she steamed over 300,000 miles and spent the following 12 years involved in a variety of developmental testing programs while continuing to serve alongside more modern nuclear vessels.

In the spring of 1979, Nautilus set out on her last underway voyage from Groton to Vallejo, CA. She was decommissioned on March 3, 1980, after a 25-year career and more than 500,000 miles under her belt. In recognition of her pioneering role in the use of nuclear power, she was deemed a National Historic Landmark by the Secretary of the Interior in 1982. Following an extensive conversion, she was towed back to Groton in 1985, where she remains open to the public today at the Submarine Force Library and Museum.

Countless unrecognized individuals played a vital role in the success of Nautilus. One of those individuals was Charles Edward Roth, the grandfather of Easton, MD, resident Charles Taylor. Roth attended school through the ninth grade before receiving an education as a patternmaker, learning the trade of converting blueprints to usable molds and patterns. He used cabinetmaking to hone his skills and spent a few years working as a contractor for the US Navy in Key West before moving to Buffalo, NY, to start a factory of his own, which he named Queens City Patternworks. Eventually, Roth’s factory was commissioned by the Navy to create a mold for the propeller of the USS Nautilus.

Taylor, Roth’s grandson, says that he learned the art of frugality and practicality from the many summers he spent with his grandfather in Buffalo while growing up, and wants to highlight the role that individuals such as Charles Edward Roth played in the success of national landmarks like Nautilus. Today, the waters of the Chesapeake Bay and the world have been profoundly shaped by feats of engineering like Nautilus, the predecessor to the nuclear Navy that should come to mind the next time you take a trip past the naval bases of Norfolk or spot nuclear-powered ships in and around the Chesapeake Bay.

This article includes condensed text from the ussnautilus.org website, used with permission from the Submarine Force Library and Museum. 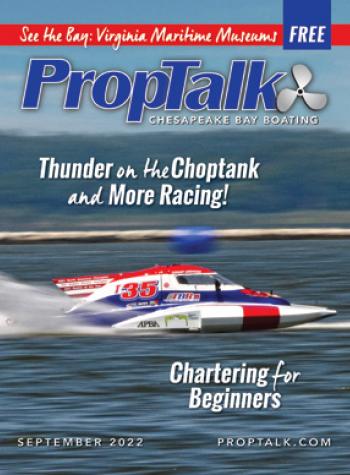